For over 4 years, Timothy Martin Burton, harassed and intimidated the founder of Tell MAMA whilst...

Jack Buckby, the press officer for the far-right Liberty GB party, told NUS campaigner Barbara Ntumy ‘I hope you don’t get raped’ in reference to Syrian refugees on Channel 4 News. Both featured in a live debate about the so-called ‘alt-right’ movement last week. Mr Buckby’s notoriety grew in 2016 after he stood in the

The post Why it’s important to challenge the far-right views of people like Jack Buckby appeared first on TELL MAMA. 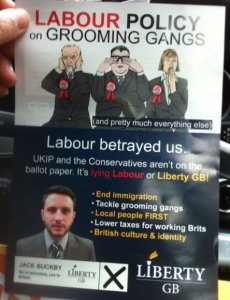 As voters go to the poll at the Batley and Spen by-election, we received notice of the following leaflets being circulated in the area by the far right nationalist group, Liberty GB. Most major parties have made the decision not to contest this by-election that came about after the brutal murder of Jo Cox MP.