An Ahmadiyya Muslim stall in London was verbally abused and repeatedly attacked by a man... 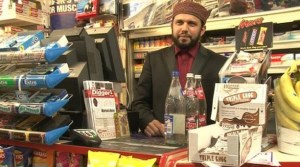