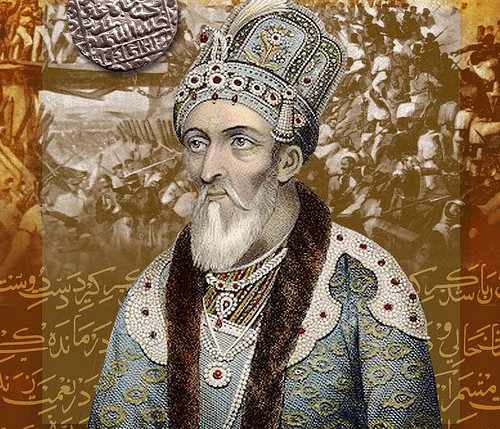 Mughal India and the Link Between Muslims and Jews: A Forgotten Story In 1858, the last great Mughal ruler of India was violently sent into exile into Burma where he eventually died in exile in 1862. A liberal, cultured and deeply cohesive community in Delhi which was nurtured by Bahadur Shah Zafar, (the last Mughal of the line of the Timur (Tamerlaine) line which had been in India for over 320 years), was fractured. The fabric of Indo-Islamic civilisation which had been stitched together by the Mughals so that Hindu and Muslim rights were protected, was violently torn apart by the England based East India Trading Company.

Yet what was the cause of this violent ejection that saw over 40 children of the King butchered and murdered with no mercy being shown by soldiers of the East India Trading Company? These mercenaries ripped the heart out of India and they supported the first rapacious multi-national corporation that went onto govern and hold whole countries to ransom.

The eventual annihilation of Mughal India was based on a number of steps, some of which included the aggressive and heavily xenophobic attitude of Victorian Evangelists whose work in India tilted relationships between Europeans and Indians so that neither culture or race interacted anymore on an equal basis. It also led to the end of the era of the ‘White Mughals’ who preceded them and who were far more understanding and empathetic in their relations. (These were English men and women who became part of the Mughal tradition and who learnt Urdu and married local women). Furthermore, to add to these strained relations, the introduction of greased cartridges to lubricate the round shot fired from new Enfield rifles introduced around 1856 meant that Hindu and Muslim sepoys would have to bite open these cartridges that were made of cow and pig fat. For Hindus and Muslims, this meant a direct threat to their identity and faith and rebellion after rebellion in Northern India broke out with these sepoys rallying to Bahadur Shah Zafar as to the true ruler of India. Their arrival in Delhi, the seat of Mughal India, would mean that on their defeat, the British enacted a brutal vengeance that led to the destruction of Delhi and to the end of Mughal rule in India. It also meant the killings of hundreds of thousands of Indians by direct or indirect punishment.

Yet, Mughal rule in India was not only about maintaining the fragility of the stitched fabric which symbolised Hindu and Muslim co-existence in India. It also covered Jewish communities since Jews from Persia and Afghanistan became courtiers of the Mughal emperors within Agra and Delhi. These courtiers became deeply influential as was, for example, the influence of a naked Sufi poet who was an Armenian Jew. Sa’id Sarmad became an adviser and spiritual guide to the son of the Great Mughal Emperor Shah Jahan and Dara Shikoh become more and more enthralled with Sa’id Sarmad, (also known as Muhammad Sa’id). It is said that numerous elements may have played a part in the eventual demise and death of Sa’id. These could have included his anti-authoritarian reactions, his nudity, his close links with Dara Shikoh and thereby his ability to possibly influence Mughal India, or his love for a Hindu man named Abhai Chand with whom he spent many years. Finally, his own spiritual journey which led him to believe that there was no God, may have led to his ultimate demise and his death in the mid 1600’s. Yet, this is only one example of the interaction and interfaces between Mughal India and Jews and such stories are seldom told. The story of Muhammad Sa’id or Sa’id Sarmad may have ended in tragedy, yet at its foundations lay the open engagement between Muslims and Jews and how many more stories such as these have been lost? I for one know one thing. Judging by the beautiful works and poetry of Bahadur Shah Zafar, my ancestor, the acrimonious relations we see today between Jews and Muslims would never have been part of the social narrative.