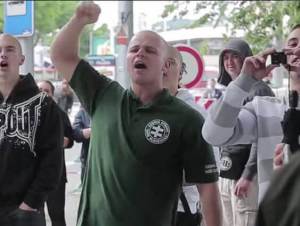 We have highlighted the shocking revelation of how neo-Nazis have been elected onto Slovakia’s Parliament and which we highlighted through our sister site, Religious Reader. Below is a video of Milan Mazurek (aged 22) and who can be seen in the green shirt in the video shouting abuse to Muslims in Slovakia. He has been