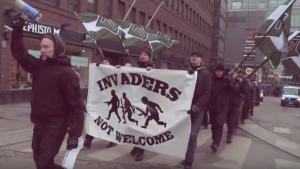 Finland may outlaw neo-Nazi groups after an assault at a far-right protest resulted in a man’s death. Police Commissioner Seppo Kolehmainen will raise the prospect of a ban with the prosecutor general’s office, according to Yle news. But days earlier, Kolehmainen had acknowleged that any ban could prove problematic as members could act independently. The

The post Finland may ban neo-Nazi groups after death of man at far-right protest appeared first on TELL MAMA.