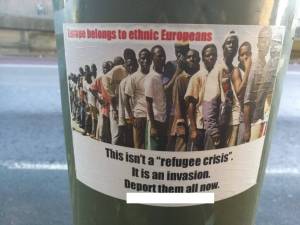 We have been sent the following sticker which appeared on a street lamp-post in Blackwater, North Hampshire. These stickers play on the fear of mosques and inevitably of Muslims, who use mosques and groups promoting such views are increasingly taking to posting such material on lamp-posts. Worryingly, the sticker below was from the far right

The post Stickers Playing on Themes of Mosques and Migrants appear on Lamp Posts appeared first on TELL MAMA.