Tell MAMA remains a trusted flagger on the platform, despite raising concerns previously about the potential direction it may take under the ownership of Elon Musk – owing to concerns about increased racism and hate on platform (which Musk denies).

A member of the public flagged the @NoballsBobby weeks earlier, concerned about its racist targeting of the UK’s first minority ethnic prime minister Rishi Sunak, its promotion of Enoch Powell and anti-Muslim conspiracies about a so-called “Islamic takeover” of the Home Office.

Other racialised memes and tropes flagged to us had linked Muslims and refugees broadly to criminality, rape, and child sexual exploitation.
Twitter removed the above examples for breaching its policies on hateful conduct, which cumulatively resulted in a permanent account suspension.

Chillingly, the account propagated the racist conspiracy of a so-called “white genocide” – ideas that inspired various acts of white supremacist terror and violence.

This is the second example in recent weeks of how we helped remove high-profile white supremacists from the platform – we previously reported on the suspension of an account that praised the Dover terrorist Andrew Leak.

When reporting such harmful and hateful materials, Twitter allows users to add additional context (280 characters) that might help explain why it breaches such policies. Twitter, however, cautions that it will “guarantee that we’ll take action based on the info provided here” – but it is a step we encourage users to consider when reporting. In addition, as a third party, Tell MAMA is happy to take this step if requested. 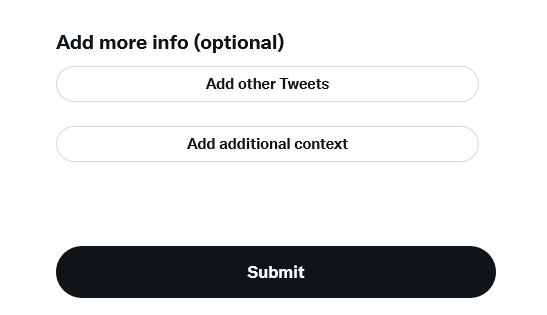 The option to add additional context appears towards the end of the reporting form when done via Twitter’s API.

Get advice from our confidential and free helpline on 0800 456 1226. Or through our free iOS or Android apps. Report through our online form. Alternatively, please leave us a WhatsApp message at 0734 184 6086.