The parent company of the Swiss chocolate bar, Toblerone, have apologised and vowed to correct issues with its moderation policy which prevented common spellings of Muhammad and Islam from appearing on its personalised products, Tell MAMA can exclusively reveal.

Our investigation began after a Muslim family got in touch to express their shock and disappointment at the discriminatory way they could not use Islam (the recipient’s surname) in the personalised product. 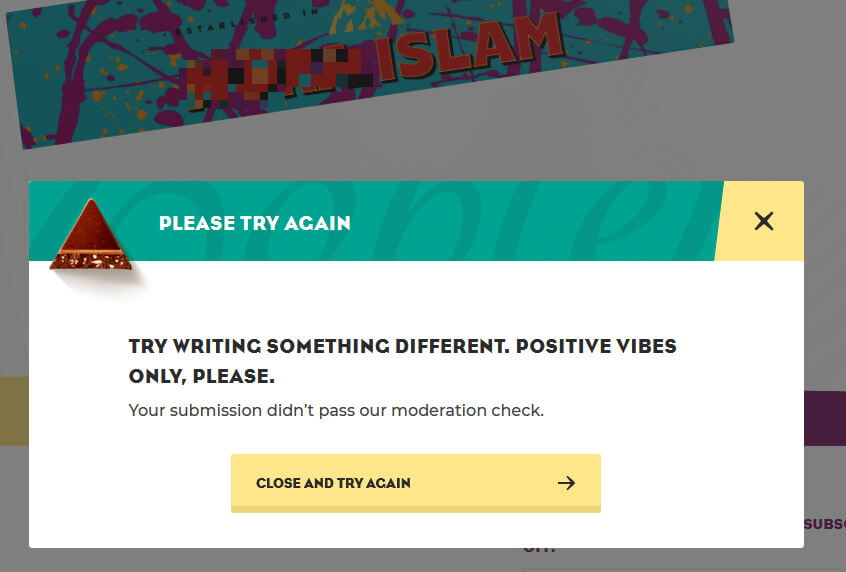 A screenshot of how the original filter blocked Islam – preventing a family from personalising their item (the first name is blurred to protect their identity).

That personalised product, which retails at £17 a bar, allows customers to select from various packaging and chocolate types and gives ten characters for a name to appear in large font, with accompanying space for the text below, with prompts suggesting moments of celebrations like graduations or birthdays.

Throughout the investigation, we found significant inconsistencies as it denies common spellings of Muhammad and Mohammed but allows other variations, including Mohamed, Mohamad, Muhamad, Muhamed, Mohamud, Mohummad, Mohummed, Mouhamed, Mohammod and Mouhamad.

The filter would, instead, read: “Try writing something different. Positive vibes only, please. Your submission didn’t pass our moderation check.”

We unearthed worrying inconsistencies regarding hate speech filters and moderation that allowed an infamous racist Holocaust denial phrase, “Holohoax“, to avoid censure. In addition, regarding white supremacist hate groups, the filter detected and filtered the Ku Klux Klan (KKK), but not the notorious neo-fascist terror group Combat 18, banned in countries like neighbouring Germany, avoided the moderating filter suggesting that the algorithm had a US-centric focus prior to Tell MAMA presenting its findings.

Of equal concern was how some racialised and dehumanising anti-Muslim and Islamophobic terms also avoided moderation – which we raised in our correspondence with their parent company.

More broadly, there is a wealth of research documenting how racial bias imprinted in algorithms impacts the health of Black people and other minority ethnic groups, employment discrimination claims (to charging higher rates for taxi rides in more diverse areas of the United States) and facial recognition software used in major cities like London.

Toblerone gained halal certification in April 2018, resulting in the far-right across Europe pushing anti-Muslim conspiracies and calling for boycotts – and yet, the word halal also fell foul of the moderation – now fixed following our investigation.

The correspondence between Toblerone and the Muslim family impacted and seen by Tell MAMA revealed the “trouble with our name moderation” as the company welcomed their “crucial” feedback. After being informed of the error, they acknowledged the “big mistake” and promised to correct it and raise it further with the customer service team.

On Friday (November 26), the press office of Toblerone’s parent company Mondelez International replied to Tell MAMA, offering an apology to those impacted and stating that it had “strengthened” its filtering system following our investigation. The spokesperson told Tell MAMA: “The diversity and inclusion of our consumers is a very important part of what we do, and we apologise to any consumers impacted. We have strengthened our filtering system based on Tell MAMA’s comments.”

Reacting to the response from the company and the changes made, Iman Atta, Tell MAMA’s Director, said: “Companies have a social responsibility to ensure inclusivity whilst protecting customers from harm, discrimination, and hate. Unfortunately, Toblerone fell short in a wholly unacceptable way – though I welcome their commitment to improving their moderation filters, it should not have been able to happen in the first place.

Muslim customers deserve equal treatment, as do all communities, and it was shocking to see how Holocaust denial could also escape moderation. We launched #No2h8November several years ago on a collective mission to challenge racism, hate, and bigotry, and we are glad that these changes came from our investigation at Tell MAMA.”