Councillor Steve Flood, who now sits as an Independent for the ward of Sprites, retweeted from the @steveflood3 account content that read, “I do not believe Islam should be allowed in the UK” and “ISLAM DOES NOT ALLOW FREE SPEECH and it is being allowed to grow from strength to strength in Britain”.

Flood had listed “borough conservative councillor” on their Twitter bio.

The local Conservative MP Tom Hunt called the retweets “cleary Islamophobic” and had no place in a mainstream political party, the East Anglian Daily Times reported.

The content seen by Tell MAMA and shared with local Conservatives in Ipswich and forwarded to party head office included retweeting content that called for a ban on halal and kosher slaughter, a total ban on immigration, and conspiracies about halal meat labelling. And boosting an inflammatory racialised falsehood that read, “A mainly Muslim Army is being ushered into our Country by the HOUR! Fit, Adult, young Men. Legions of them, from all Cultures and Countries, of which we know NOTHING! 40K so far since 2021. Remember, our own ARMY has just under 80K. Our National Security is in grave Danger!”. 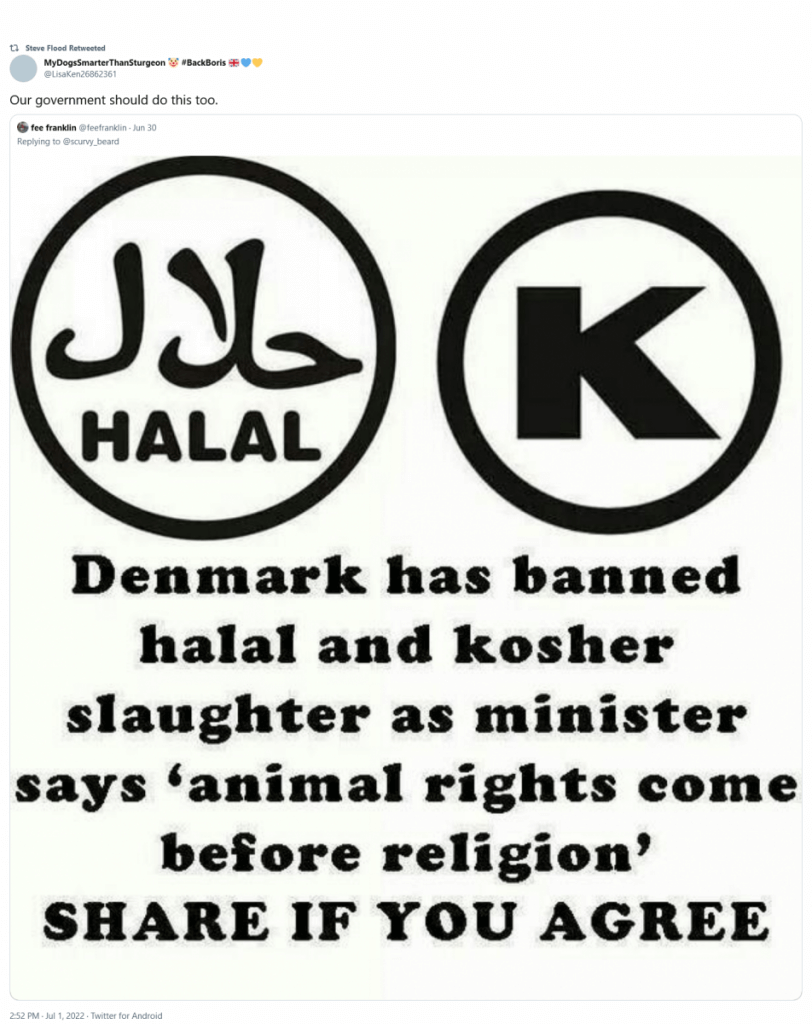 Evidence of Cllr Steve Flood retweeting calls for a ban on kosher and halal slaughter in the UK.

The anti-Muslim falsehood as retweeted by Cllr Steve Flood.

The image used in the original tweet was a photograph of refugees in Calais, taken in 2018. 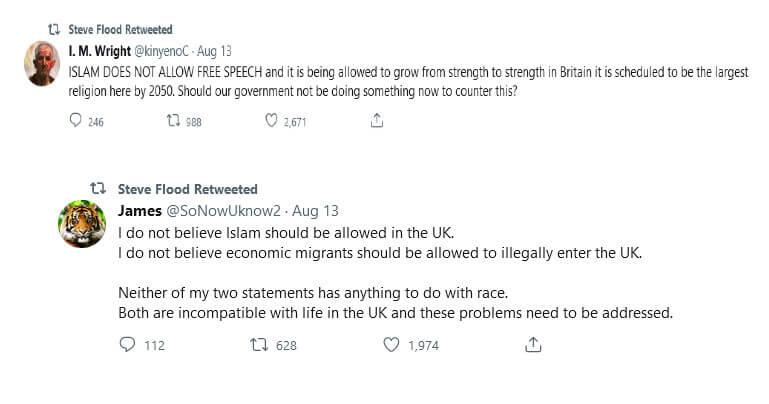 Examples of the anti-Muslim and Islamophobic retweets that resulted in Cllr Flood’s suspension from the local Conservative party.

Anti-LGBT+ content found by Tell MAMA included a retweet from Cllr Flood from an account holder who called Pride a “sexual deviancy fest” and from a separate account that claimed, “Pride is now just a celebration of perverts, narcissists and pedo apologists.”

Other councillors documented their misuse of Twitter in 2021 to spread anti-Muslim falsehoods.

“The suspension includes removal of the whip from the Conservative group at the borough council.”

A meeting on Wednesday (August 24) will decide the future of Steve Flood in the Conservative party.

We continue to offer all councils and local authorities bespoke training on social media best practices and digital trends around anti-Muslim hate and Islamophobia.