The British Museum carried out an internal investigation and apologised after a Muslim mother complained about what she felt was the religious profiling of their young daughter following a visit in June, Tell MAMA can exclusively reveal.

It left them angry, frustrated and embarrassed, especially as white families next to them could photograph the area without hindrance or questions from staff. They have provided us with a photo of the child posing at a set of doors which triggered it – we have pixelated their face to protect their identity. 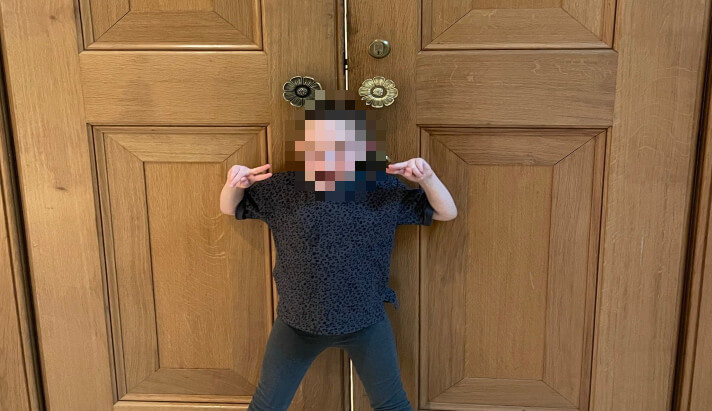 The mother provided us with a photograph of their daughter posing by a set of doors before the staff member targeted them. We have pixelated her face to protect their identity.

We can exclusively reveal that the investigation remains ongoing, with the family receiving an update on their complaint after we got in touch. Tell MAMA saw a follow-up email to the family, revealing an “outcome was issued” to the staff member responsible. They further noted that “we are sorry that such an interaction with a member of our team caused you such distress” and expressed hope that such a negative experience has not dissuaded them from visiting again. Last week, a spokesperson told us, whilst the investigation remained active that “We shall be in touch with the visitor once that is concluded and also consider what other action may be appropriate. The Museum continues to provide diversity training to all staff to support an excellent experience for all our visitors.”

We exclude specific identifying factors to protect their identities but stress that they felt targeted for their ethnicity and religious clothing. And they described to our Casework Team that the staff member who profiled them as a potential ‘security risk’ was a white male in their mid-to-late twenties or early thirties.

The visit occurred on June 25.

Nor did the family break any rules or regulations about photography. As the British Museum makes clear, the public can use handheld cameras with flash and 3D imaging software and similar equipment that does not require a stand – prohibitive exceptions occur only in areas with written notices (none appeared in this area).

Before exiting near an entrance foregrounded by two lion statues and a bust of King Edward VII, their young child, who is just six years old, wanted to pose next to a set of doors with ornate floral designs to commemorate their visit. Here, however, is when the member of staff intervened.

At around 15:16, the staff member began to question the family in a manner they described as aggressive, with repeated questions that included statements like “why are you photographing the door?” only for the mother to respond that she only intended to photograph their daughter.

After speaking with management, she felt the response was dissatisfactory and not handled with the seriousness required – who offered an apology and stressed that they intended to review the CCTV, adding that staff go under diversity training.

A series of emails exchanged by our service user and the British Museum reveals an added frustration about how the internal investigation began between July 25 and 26. Two days after submitting their written complaint, the initial reply sought to confirm further details from the family, reassuring them that such complaints get taken seriously, as the staff member responding felt “disturbed” to learn what happened.

By July 1, she sent further correspondence, requesting a timeline of how the museum intended to investigate her complaint further. A reply from the museum came a day later, beginning with an apology, owing to an apparent spam issue, confirming that the investigation had since identified the staff member. However, that email provided no such timeline or further details about the investigation, to their dismay.

Two further emails stressed her concerns about the nature of the investigation and their desire for further clarification given the issues raised of religious profiling. The initial correspondence acknowledged that she felt their response had “fallen short” of her expectations.

Weeks would pass without further reply, nor had any other staff member contacted them via Resolver – an online tool that simplifies consumer complaints.

Here is when Tell MAMA became involved, with the written consent to share their experiences.

We asked the British Museum a series of questions on the family’s behalf before the new email to the family came last Friday as a spokesperson told us:  “The British Museum recorded a complaint made on 25th June concerning a member of our staff. The complaint is being investigated within formal procedures, but we are not able to report the outcome at this time. We shall be in touch with the visitor once that is concluded and also consider what other action may be appropriate. The Museum continues to provide diversity training to all staff to support an excellent experience for all our visitors.”