UK: Why is the Home Office letting sectarian preachers into the country?

In fact, just for good measure, the preacher in question posed and took some pictures for posterity as he exited the country and onwards to Pakistan. 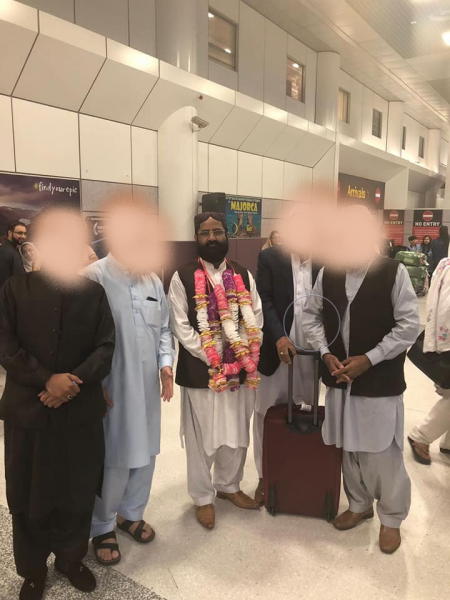 Well, meet Khadim Hussain Khurshid, who was invited from Pakistan to speak at a mosque in Luton on the 5th of August 2018. So pleased was he to be invited that he listed the invitation on his ‘official’ Facebook page.

You see, a day or two before the horrendous May 2018 attack on the Ahmadi mosque in Sialkot, Khurshid had been whipping up the congregation with anti-Ahmadi rhetoric.

So let us see what he said in his video that we have included below. Translated, the text demonstrates religious extremism and violence from the mouth of this preacher:

Khadim Hussain Khurshid: “If that museum is named after that shameless man (Mirza Ghulam Ahmad  – the spiritual head of the Ahmadi movement), so be warned DPO (Divisional Police Officers), we will be heading to your office.

“Whoever loves that Mirza keeps your hands down. Those who have any shame must go out and warn the administration that if they don’t lock down that (Ahmaddiya) building until next Friday, we will see them. And Khadim Hussain will be first one to bring it down.

“If you don’t like what I am saying, ask your mothers what was wrong with your birth. This is a matter of the honour of Prophet Muhammad (PBUH) and thousands like me could be sacrificed for that.”

So, let us be clear, would you let someone who was promoting open sectarian hatred into our country?

Khurshid was clearly promoting violence against Ahmadi buildings in May 2018. Within days, the Ahmadi mosque in Sialkot was literally torn down, brick by brick. His words and highly divisive and inflammatory remarks may have been amplified by others who were also involved in stirring up local congregations. However, the question is this: has our Government got oversight of the activities of such individuals in Pakistan? If so, how do they manage to get into the UK? If not, why not? These are basic questions we should all be asking.

The post UK: Why is the Home Office letting sectarian preachers into the country? appeared first on Faith Matters.