We are proud to launch the following report, which highlights the trajectory of the Democratic Football Lads alliance, offshoot groups and the ongoing engagement with anti-Muslim and radical far right movements in the United Kingdom.

The report has been authored for Faith Matters by two leading lights in this area of work, Dr Matthew Feldman and Dr William Allchorn.

This report appears a decade after the emergence of the English Defence League (EDL), a street movement that has changed the face of radical right politics in Britain. 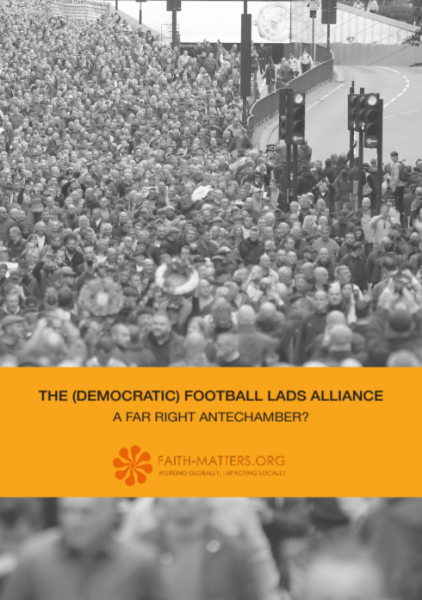 Key points from this report include:

*   A number of key supporters of the D/FLA, such as ‘Tommy Robinson’, rose to national prominence through these new street movements, which include not only the ‘defence leagues’ but the ‘Infidels’, Pegida UK and now the D/FLA.

*   The D/FLA is on the way to becoming a fully-fledged radical right movement through its overwhelming focus Islam and consistent engagement with anti-Muslim prejudice. Yet the other issues in which it is engaged (such as combating homelessness) have staved off the ‘Far Right’ label to date, but 2019 will be a pivotal year for the group.

*   The immediate stimulus for the formation of the Football Lads Alliance clearly emerged in reaction to several UK-based ISIS-inspired terror attacks that occurred from March to June 2017.

*   Organisationally separate from the established UK Radical Right, the D/FLA can be more fruitfully aligned with the nationalistic and anti-establishment concerns of working-class football casuals in the UK.

*   Since the FLA-DFLA splinter in April 2018, however, the rhetoric and group of actors within this new protest movement have seen the group move onto anti-Islam and anti-Muslim issues more customarily associated with the UK Far Right.

*   At the start of 2019, the direction of the DFLA looked unclear – it is however certain that the DFLA may yet prove to be another incubator group for the Far Right, like the defence leagues and other anti-Muslim groups before it.