This note, with dabs of red ink, was left at a local post office in... 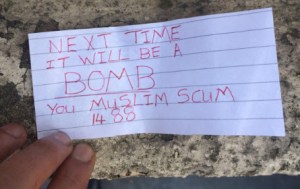